Defending and strengthening the way of life stemming from Christian faith

Prime Minister Viktor Orbán’s speech at the inauguration of the renovated Saint George’s Church in Nagykáta, Hungary (17 May 2019)


From the Prime Minister’s Press Office

It is a great joy for me to be here, and to celebrate the re-dedication of your renovated church with you. And naturally I congratulate the latest recipient of the St. George Award. I have a dear friend who always warns me not to use military terms in speeches at church events. And while I mostly try to heed that advice, nonetheless I can’t resist saying how lucky you are that every single day you are under the protection of Saint George, the legendary warrior saint. His life shows us most clearly that, if life demands it, we must bravely stand up for the truth, for what is good, and in general for every important value that has been entrusted to us. Observing his example, we clearly see that we Christians – and particularly those of us whom God created as Hungarians – must always be ready to defend our faith, our country, or our family when needed. And I have personal experience that you here in Nagykáta understand this very well.


The last time I was here as your guest was sixteen years ago, in 2003. Back then cold winds were blowing through Hungary. It seemed that what we had built between 1998 and 2002 would be demolished. It seemed that we were seeing the rise of people for whom national cohesion meant little or nothing at all, and who were indifferent to the Hungarian people’s thousand-year heritage. I remember that back then there were many who were sad at the sight of this, and planned to preserve their faith and dreams by withdrawing to their churches and inner rooms. You Catholics of Nagykáta did not do this. With pride and dignity you stood by the knightly legacy of Saint George and the Christian witnesses. With your parish priest taking the lead, you showed how to persevere, even in difficult times.
I remember, as if it were yesterday, the beautiful spring afternoon on which I had the privilege of being with you. There were many of us and we were well aware of our difficult situation, but we were trusting, because we knew that in the end our fate would be decided in a higher place. We encouraged each other, but it was difficult to tell exactly who encouraged whom: whether you encouraged me, or I encouraged you. It was an uplifting, beautiful day that gave us all strength. Since then the world has changed a great deal. Seven lean years passed, and in 2010 we won again. With due modesty, but also with the self-confidence of a job well done, I can tell you that we have accomplished most of what we resolved here in 2003. We declared in our Fundamental Law what Hungary owes to Christianity, and we strengthened cooperation between the state and the church for realisation of the common good. The seeds that we sowed together sprouted, grew shoots and eventually bore fruit. 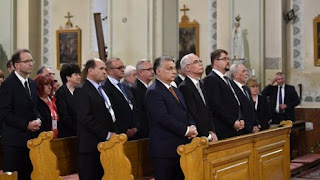 Today twice as many children study in church schools as did ten years ago, and churches are often doing more to look after elderly people and strengthen communities than one could expect. But at least as important as this is the spiritual struggle that we are fighting in Europe today against immigration. Once more what is at stake is what, after World War II, a founding father of the uniting Europe Robert Schuman described thus: “Europe will be Christian, or it will be nothing”. Naturally I don’t want to take Father András’s job from him. All I’m saying is that in this work we all have our own tasks. Together with his fellow priests, the mission of Father András is to lead us fallible people on the path of faith. Meanwhile our duty as Christian democratic political leaders is to defend and strengthen the way of life that has grown from the Christian faith: human dignity, family, homeland and our church communities. Our Fundamental Law also declares: “The protection of the constitutional identity and Christian culture of Hungary shall be an obligation of every organ of the state.”


We have a great deal more work to do. No one knows what the future holds, but I do know that our aspirations can only meet with success if in the Carpathian Basin there are ever more living confessional communities such as yours. The prosperity of our families, the advancement of our children and future generations, the security of our lives and our national cohesion are all values which we can only defend and fulfil together, and only on the two thousand-year foundations of Christianity. I thank you for the support I have received from you in recent years. Thank you for your encouragement and reassurance. Thank you for your prayers, and please continue to honour us with your trust in the future. It is important for our economy to be strong. It is important for our young people to be intelligent, and to be equal to the competition. But it is at least as important for them to know where they belong: to know where their home is, and what heritage they have received from their parents, their grandparents, and those who went before them. In this mission, in this day-to-day work I wish you good health, perseverance and cheer – from wherever the wind may blow. And as we are now also rededicating a renovated church, please allow me to briefly welcome you with a greeting from my part of the world: “Jesus on our door, the Blessed Virgin on our window, four beautiful guardian angels in the four corners of our house. Come holy crosses, guardian angels protect us!”