Eccellenza, Signor Luogotenente di Gran Maestro,
Your Excellencies, representatives of the Diplomatic Corps
Distinguished Members of the Order of Malta
Ladies and Gentlemen,


It is normally the mission of every Embassy to represent in some way also the scientific achievements of its own Country, especially if there is the possibility to show the connections with the host Country. I thought therefore interesting to invite Professor Balázs Major to give a lecture about his own researches conducted in Syria. We will see, in fact, that his work has a special relevance for the history of the Order of Malta in the Holy Land.


We are most honoured this evening by the presence of the Lieutenant Grand Master, His Excellency Fra’ Giacomo Dalla Torre Del Tempio Di Sanguinetto. I would like to express my special gratitude to His Excellency János Esterházy, Receiver of the Common Treasure for the possibility of organizing this event. I greet with special sympathy the representatives of the Hungarian Association of the Order of Malta, President Kristóf Szabadhegy and Chancellor János Wettstein. And, of course, we are glad that Professor Balázs Major accepted our invitation to give a lecture this evening, contributing to strengthen the ties between Hungary and the Order of Malta.


Professor Balázs Major holds a degree from the Eötvös Loránd University of Budapest in History, Archaeology and Arabic Studies, a PhD from Cardiff University, as well, and has studied at the University of Damascus, too.


He is presently Director of the Institute of Archaeology of the „Pázmány Péter” Catholic University in Hungary, and member of different professional panels like the Council for the British Research in the Levant, the Union Européenne des Arabisants et Islamisants, the Working Group of Islamic Studies of the Hungarian Academy of Sciences, the ICOMOS Hungarian National Council.


Professor Major is an outstanding Hungarian archaeologist with a long publication list and a long experience of fieldwork in Syria, Lebanon and, recently in Iraqi Kurdistan. In fact, he has been director of the Syro-Hungarian Archaeological Mission for more than a decade. Persevering even now, during these years of horrible armed conflict in Syria. However, he has conducted some interesting excavations in Hungary, too, namely at the ancient royal and archiepiscopal residence of the Castle Hill in Esztergom. In the last years, he tried also to identify the ancient Cistercian monastery of Egres (Igris) now in Romania, with the burial place of King Andrew II of Hungary.


It is more than a coincidence: it is, in fact, Andrew II the “link” between Hungary and the Holy Land, and especially to the Crusaders’ fortresses, which we will hear about this evening, since Prof. Major is a specialist of the medieval military architecture of the Middle East. I can anticipate briefly that Margat and Krak des Chevaliers have been not only visited by King Andrew, exactly 800 years ago, but were also provided with conspicuous financial donations. We can state that the “Hungarian crusade” of 1217-1218 was a sign that the medieval Hungary was a full member of the European community of that time.


Nowadays Hungary is keen on helping Christians in need, and the Government has provided significant contributions to the preservation of Christian heritage in the Middle East. Professor Major has his own, personal merits and maybe we can say that, since our official relations with Syria have been shut down at the beginning of the conflict, he is presently our best Ambassador in that country. 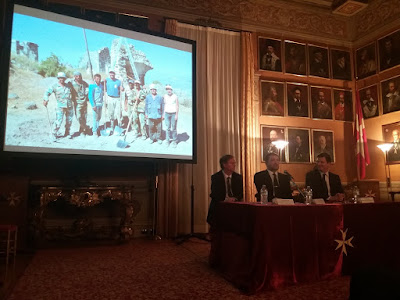