I wish to extend my warmest welcome to the church and lay leaders of the Hungarian Reformed Church. It is an honour for me to attend this memorial synod where we remember the heroes of the 1956 revolution, the victims of the ensuing retaliation, and the persecuted. Before I do, I’m going to yield to our Esteemed Bishop’s gentle provocations which we always welcome with respect and gratitude, and I’m going to tell you that, on the part of the Government, we see the memorial year of the Reformation as an opportune moment to help the due celebration of Good Friday by declaring it a public holiday. There is now only a single obstacle we have to overcome: we are awaiting the nod of assent from a Reformed Church brother of ours from Karcag [i.e.: Minister of National Economy Mihály Varga - editor's note].

I am pleased that I may welcome you here, in this building out of all places, where Hungarian freedom found one of its first homes that autumn. On 23 October 1956 the youths of the Budapest Reformed Church Academy of Theology marched together with Hungarian writers and university students because – as they wrote in their declaration, and I quote – „their conviction, their love of the homeland and their traditions of four hundred years compelled them to fight together with the nation for its freedom by following in the footsteps of their forefathers who always fought side by side with the people and for the people”. And they engaged in the fight: they rescued the wounded under the flag of the Red Cross, or took food to the Práter utca rebels in pushcarts. Two of them, István Magócsi and Lajos Herczegh died a hero’s death, and six others were wounded.


Protestantism is one of the fundamental building blocks of modern European democracy and culture. The tradition of five hundred years of the courage of professing one’s faith which today sets the standard for Europe once again. According to the current state of affairs, today it takes courage once again to declare the simple truth that modem European culture, and today’s civic regime owe their very existence to Christianity. Today they do not merely wish to sever our roots on the stage of European politics, but they wish to replace the soil from which the buds of Europe stemmed. We often do not have the courage today to say this. To stand alone in the shadow of death by the stake before the Imperial Diet, to visit people suffering from contagious diseases as the religious leader of a city, or to run the risk of imprisonment or galley slavery for the gospel are acts of bravery which European man today is appalled at the very mention of. The Reformed Church in Hungary carried within itself the courage of faith even when during the darkest period of the communist dictatorship it was deprived of its schools with long-standing traditions, when its spiritual leader, its learned bishop was forced into exile, when its leaders were replaced by peace preachers, and its ministers were left to beg. And when it seemed like the dictatorship had succeeded in crushing the Hungarian Reformed Church to dust, along came October 1956, and proved that only the stars embellishing the towers of churches are there to stay.  From dust and ashes – as so many times during the course of its history – the Hungarian Reformed Church revived once again.

Revolutions – as we heard before from my Esteemed Brother László Regéczy-Nagy – are never conceived by the side of drawing boards, there is no recipe, there is no script for them. They sometimes draw inspiration from a dagger flying out of a walking stick, at other times, they are induced by a piece of writing nailed to a church door, while they sometimes draw forth from a repressed state of mind which words cannot describe. At times like this, cobble stones ripped up from the ground, overturned trams, Molotov cocktails thrown onto tanks do the talking instead of people. There is no timer attached to revolutions either, they do not stem from the current constellation of the geopolitical galaxies; they shoot forth from the innermost and deepest layers of the nation’s disposition. They are exceptional moments of grace when, all of a sudden and seemingly without any warning sign – as we heard from the Honourable Bishop – the world around us comes to a boil.

Hence the fact that revolutions can only ever be crushed, but never defeated. Despite the retaliation, the forced silence and the lies, the embers continue to glow under the feet of those who trampled on them. One thing alone can cause the fall of a revolution: if it loses the purity of its objectives, when the brave community of citizens turns into an angry and base mob. And this is the very moment when the people of the soul must enter the stage. This is what happened on 26 October 1956 in Mosonmagyaróvár as well when after repeated volleys of firing – leaving hundreds dead and injured – in which the members of the ÁVH, the State Protection Authority were involved, the angry people wanted to lynch them. By defying the anger of the people, Lajos Gulyás, a pastor from Levél, risked his own life in order to put an end to people taking the law into their own hands. He knew that he can only say yes to the revolution if he says no to chaos and killing. He can only say yes to the lawful punishment of those who are guilty if he says no to the people taking the law into their own hands and lynching. We also remember this moment today.


And we likewise remember those who were put on show trials, sentenced to death, executed and buried in unmarked graves for their deeds by Kádár’s socialist regime. We remember the pastors who were arrested, locked up in prison, or compelled to suffer grave disadvantages at the hands of church leaders who were ready to serve the State on account of their involvement in the revolution and their standing up for the renewal of the church. And we also remember that we had to wait all the way until 1989 for the theologians who died during the revolution to finally receive a memorial plaque. At today’s Memorial Synod, we respectfully stand before all members of the Reformed Church who took part in the fights or in the rescuing of the injured and the persecuted that autumn. We also pay tribute to those who continued to preserve the memory of the revolution and the revolutionaries during the decades of silence, and carried the cause of Hungarian freedom and the pain of the mourning before God in their prayers.

The example set by the Reformed church martyrs and advocates of the 1956 revolution is the past that continues to live with us to this day, and forms part of the history of the nation and the church as the wooden headstones standing in the yard of theology testify to today’s generation of theologians about the fate of Lajos Herczegh and István Magócsi, who gave their lives that autumn in order to help their fellow human beings. We know – as we may have experienced – that the harsh reality of the dictatorship gnaws human dignity away, slowly, but surely; only emptiness, diminished vitality, resignation and pettiness remain after the dictatorship. In general. By contrast, we here, in Hungary can be grateful to our heroes for the fact that even during the darkest period of Hungarian history, during the Soviet occupation, we were able to hold our heads high because, even if only in secret, we had something to be proud of. They won even if they died. They won because instead of the dictatorship’s forty years of depressing darkness, human weakness and inner discord, they left to us, to their successors and to every Hungarian child to be born hereafter the glory of perseverance, courage, heroism and greatness.

„Greater love has no man than this, that a man lay down his life for his friends.” Honour to the brave! Soli Deo gloria!
Bejegyezte: HUEMBVAT dátum: 06:04 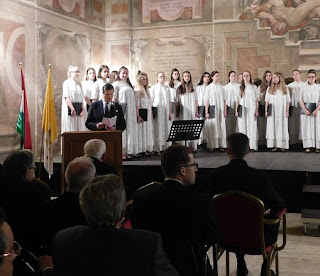